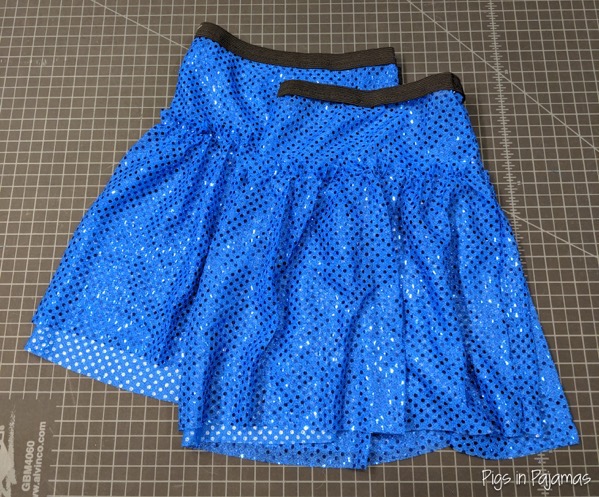 I’ve got a massive backlog of projects that I worked on over the last year (or two . . .) that I never posted, so I’ll be squeezing those in between more recent stuff. This one here is a set of glitter dot running skirts that I made for the Universal Studios Minion 5K. Courtney and I naturally went as Minions.

I used this skirt tutorial by Beauty Still Remains. It was pretty easy and the skirts took about an hour or two to do. The part that took the longest was gathering the fabric to attach to the yoke. I hate gathering by hand, but I wasn’t sure what the gathering amount would be with my gathering foot. Next time I will probably just use the gathering foot. I’ve got some glitter dot leftover from a 70’s outfit I made and I’m pretty sure it’s just enough for a skirt. It’ll be great to use the leftover scraps for something useful!

The blue glitter dot was less than $4 a yard from fabricdirect.com. I happen to order from there because they had some other fabric I wanted, but you can pretty much get it anywhere. I know JoAnn’s typically carries it as does CaliFabrics which I like ordering from since they’re local.

The front and back are pretty much the same so you can’t go wrong no matter how you put it on!

The Quilt That Didn’t Want To Be (aka Bohemian Triangle Quilt)
March 28, 2020

Another day another muslin. Normally I would have

Making progress on my Everyday Raglan. Made it to

Back to tracing. Gonna try a bigger cup size. Thou

Made an adjustment to sides and taped in my boning

Stitched up my muslin today. Realized there was no

Got all the pieces cut out today. I'm using this p

New blog post up! I finished this quilt last night

Got my muslin fabric and ready to start cutting an

#homegirlsweater update. Everything is blocked and

Started tracing out the bodice this evening. Hope

One of the things I'm using my time for (in additi

So I don't have an image for today because today I

Continuing to work on my #homegirlsweater (pattern

Decision time! Here's the style and fabric I picke

New blog post up about the glitter skirts I made f

There really are so many combinations to choose fr

Using this time to finish up some projects like th

Did everyone watch the first video from @gertie18'